Pixel defects can be of three kinds: hot, warm and dead pixels. Hot pixels are elements that always saturate (give maximum signal, e.g. full white) whichever the light intensity is. Dead pixels behave the opposite, always giving zero (black) signal. Warm pixels produce random signal. These kinds of defects are independent of the intensity and exposure time, so they can be easily removed – e.g. by digitally substituting them with the average value of the surrounding pixels.

There are several types of noise that can affect the actual pixel readout. They can be caused by either geometric, physical and electronic factors, and they can be randomly distributed as well as constant. Some of them are presented below:

Sensitivity is a parameter that quantifies how the sensor responds to light. Sensitivity is strictly connected to quantum efficiency, that is the fraction of photons effectively converted into electrons.

Dynamic range is the ratio between the maximum and minimum signal that is acquired by the sensor. At the upper limit, pixels appear to be white for every higher value of intensity (saturation), while pixels appear black at the lower limit and below.

The dynamic range is usually expressed by the logarithm of the min-max ratio, either in base-10 (decibel) or base-2 (doublings or stops), as shown below. Human eyes, for example, can distinguish objects both under starlight and on a bright sunny day, corresponding to a 90 dB difference in intensity. This range, though, cannot be used simultaneously, since the eye needs time to adjust to different light conditions.

A good quality LCD has a dynamic range of around 1000:1, and some of the latest CMOS sensors have measured dynamic ranges of about 23000:1 (reported as 14.5 stops).

SNR (signal-to-noise ratio) considers the presence of noise, so that the theoretical lowest grey value as defined by the dynamic range is often impossible to achieve. SNR is the ratio between the maximum signal and the overall noise, measured in dB. The maximum value for SNR is limited by shot noise (that depends on the physical nature of light, and is this inevitable) and can be approximated as

SNR gives a limit on the grey levels that are meaningful in the conversion between the analog signal (continuous) and the digital one (discrete). For example, if the maximum SNR is 50 dB, a good choice is a 8 bit sensor, in which the 256 grey levels corresponds to 48 dB.

Using a sensor with higher grey levels would mean registering a certain degree of pure noise.

Spectral sensitivity is the parameter describing how efficiently light intensity is registered at different wavelengths. Human eyes have three different kinds of photoreceptors that differ in sensitivity to visible wavelengths, so that the overall sensitivity curve is the combination of all three. Machine vision systems, usually based on CCD or CMOS cameras, detect light from 350 to 900 nm, with the peak zone being between 400 and 650 nm. Different kinds of sensor can also cover the UV spectrum or, on the opposite side, near infrared light, before going to drastically different technology for far wavelengths such as SWIR or LWIR. 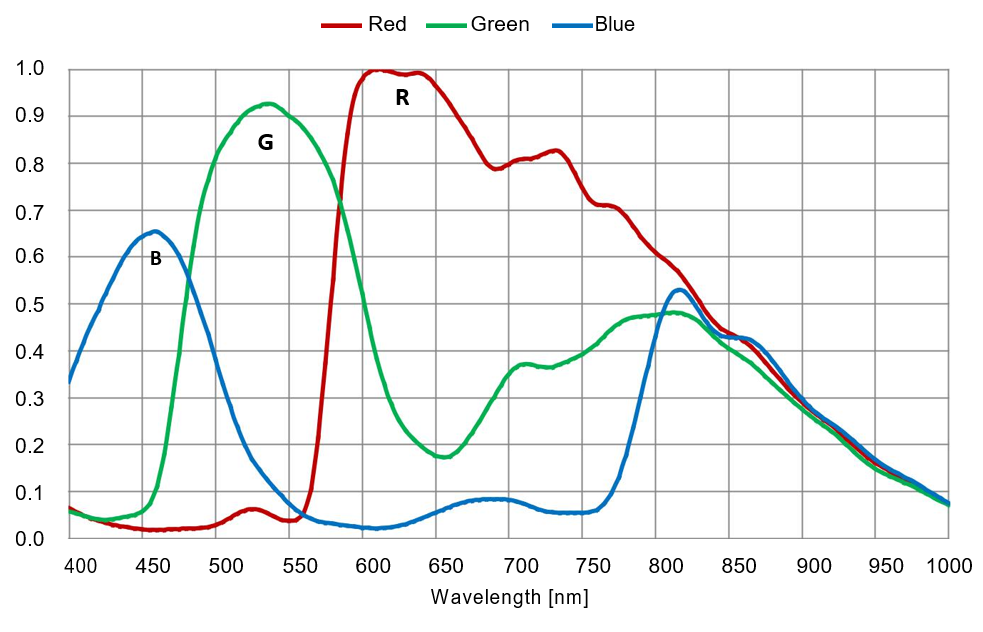 Especially on CMOS sensors, each pixel active area is surrounded and surmounted by circuitry and metal connections responsible for the image readout. This greatly reduces the amount of light which can be successfully detected. If the light rays are not perpendicular to the sensor surface it’s even worse, since they are reflected by near interconnections on the metal layers of the sensor chip.

Almost all modern image sensors are coated with an array of micro-lenses. These lenses gather the incident light and focus it on the sensitive area of the pixel, thus increasing the sensor sensitivity.

Usually the micro-lenses are centered over each pixel active area regardless of their relative position on the sensor surface.
However some sensors, especially the ones designed for the photography / consumer market, can be equipped with micro-lenses which are gradually shifted as we go from the center to the corner of the sensor. This is necessary to obtain a better sensitivity uniformity over the sensor when it’s used with common lenses which are not telecentric on the sensor side. The CRA is 0° in the center of the sensor and can reach several degrees at the corner of it. 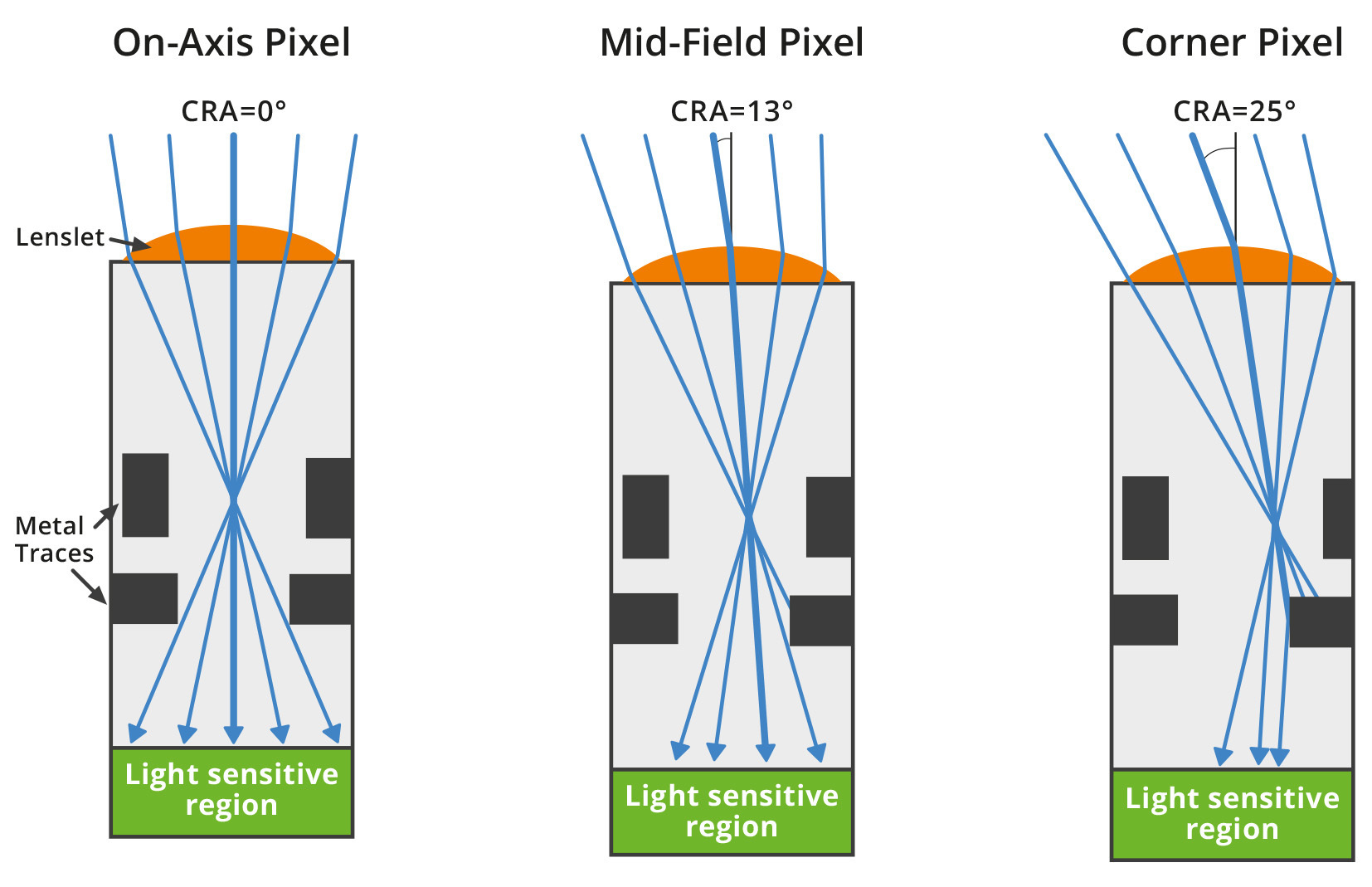 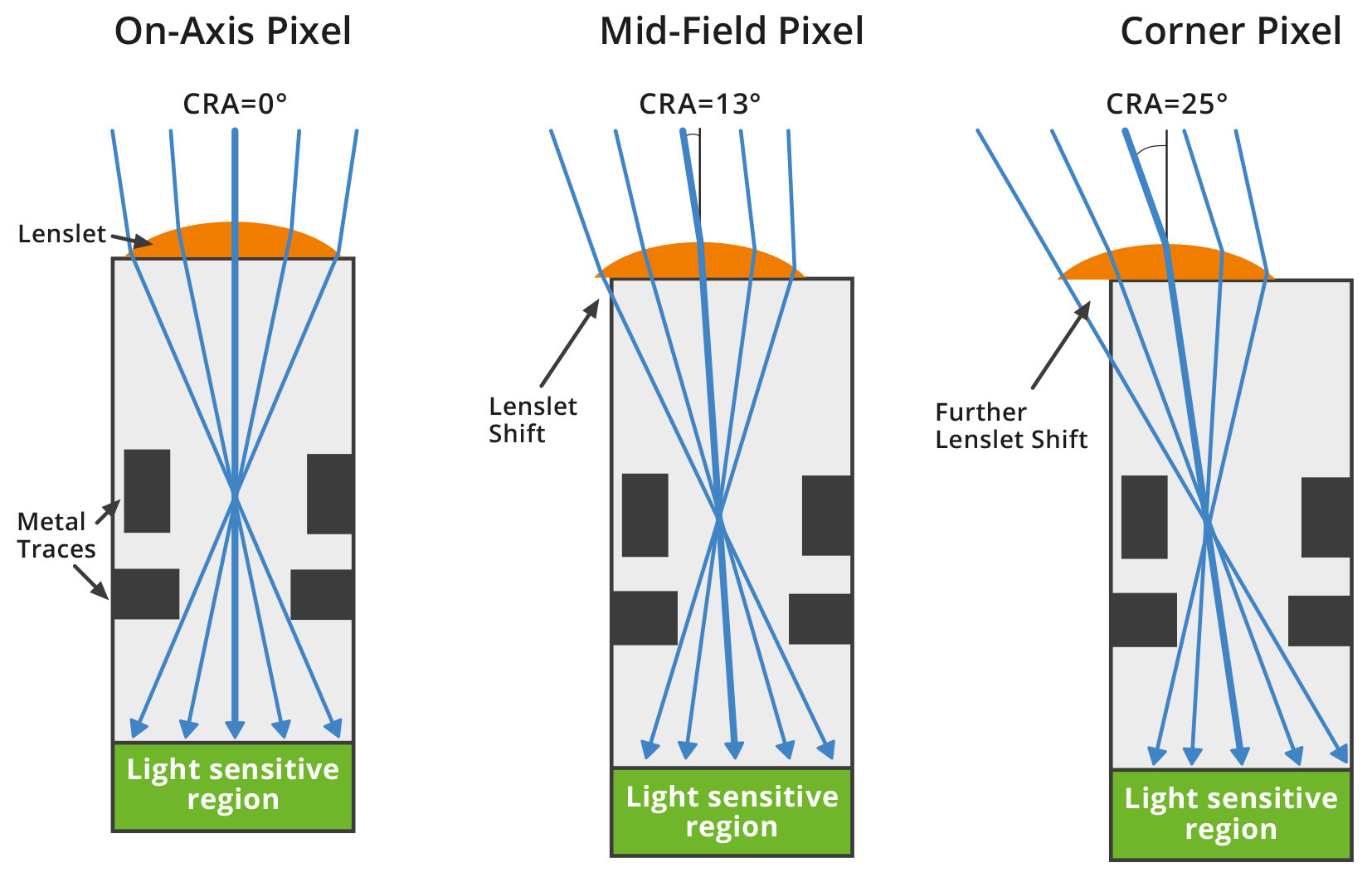 Since these sensors are optimized for non-telecentric lenses, they leads to poor performance when used with telecentric lenses. The most obvious effect is vignetting, but also some kind of optical aberrations can appear.

As seen above, the circuitry which surrounds the pixel active area greatly reduce the light sensitivity of the sensor, only partially compensated with the use of micro-lenses. With the last cutting edge fabrication technology it’s possible to build a sensor flipped upside down. In this process, after the creation of the photodiodes, transistor and metal interconnections, the chip is flipped upside down and mechanically polished till the previous “bottom” of the silicon chip is exposed. In this way the pixel active area is on the top of the sensor and it’s no longer obstructed by the readout circuitry.